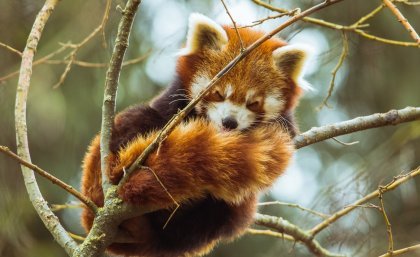 Source: We must prioritize the protection of ecosystems

We have a chance to halt biodiversity loss. The stakes have never been higher

Negotiations over a 10-year agenda for nature are about to begin. Our ecological future depends on the engagement of every global citizen. The year 2020 has been designated a “super year for nature”, when the global community will rededicate itself to halting biodiversity loss with a 10-year action agenda…

Putting biodiversity on the balance sheet

It will be presented in October at the 15th United Nations Convention on Biological Diversity. The ambassador of the review, Sir David Attenborough…

Hundreds of bird species in India are declining

Hundreds of bird species in India are in decline, according to the country’s first major report on the state of bird populations. Birds of prey and waterbirds seem to have been hit particularly hard owing to habitat destruction, hunting and the pet trade.

The global conservation community is shocked and deeply concerned about the deaths of two butterfly conservationists in Mexico. On 29 January, environmentalist…

Sweden has become the latest nation to join the UK’s Global Ocean Alliance to help drive urgent action to safeguard the ocean and protect its precious wildlife.

We need money for nature: not lies about climate spending

The problem is, half of that money is meant to come from the Common …

“Humanity sits on the precipice of irreversible loss of biodiversity and a climate crisis that imperils the future for our grandchildren and generations to come.”

Politicians and influencers are signing up to the campaign, but to get things right we must keep in mind the science behind it, says Tom Crowther…

We must prioritize the protection of ecosystems

Prioritising and tracking the protection of countries’ ecosystems-from wetlands to reefs, forests and more, is critical to protecting Earth’s biodiversity.

Rising sea surface temperatures and acidic waters could eliminate nearly all existing coral reef habitats by 2100, suggesting restoration projects in these areas will likely meet serious challenges, according to…

If ocean temperatures don’t drop in the next two weeks, heat stress could tip reef over into another widespread event…

A century ago, more than one million giraffe used to roam across sub-Saharan Africa. But these gentle giants are now extinct in at least seven countries with only…

The United Nations must get its new biodiversity targets right

Global goals to reduce biodiversity loss will be revised this year. All eyes are on China, which must ensure the new targets are measurable and meaningful.

Set a global target for ecosystems

The conservation community must be able to track countries’ progress in protecting wetlands, reefs, forests and more, argue James Watson and colleagues.

WWF recovery plan to save the world’s freshwaters from collapse

The World Wildlife Fund (WWF) has published an emergency recovery plan to prevent the collapse of biodiversity in the world’s freshwater rivers, lakes and wetlands. Freshwater covers approximately…