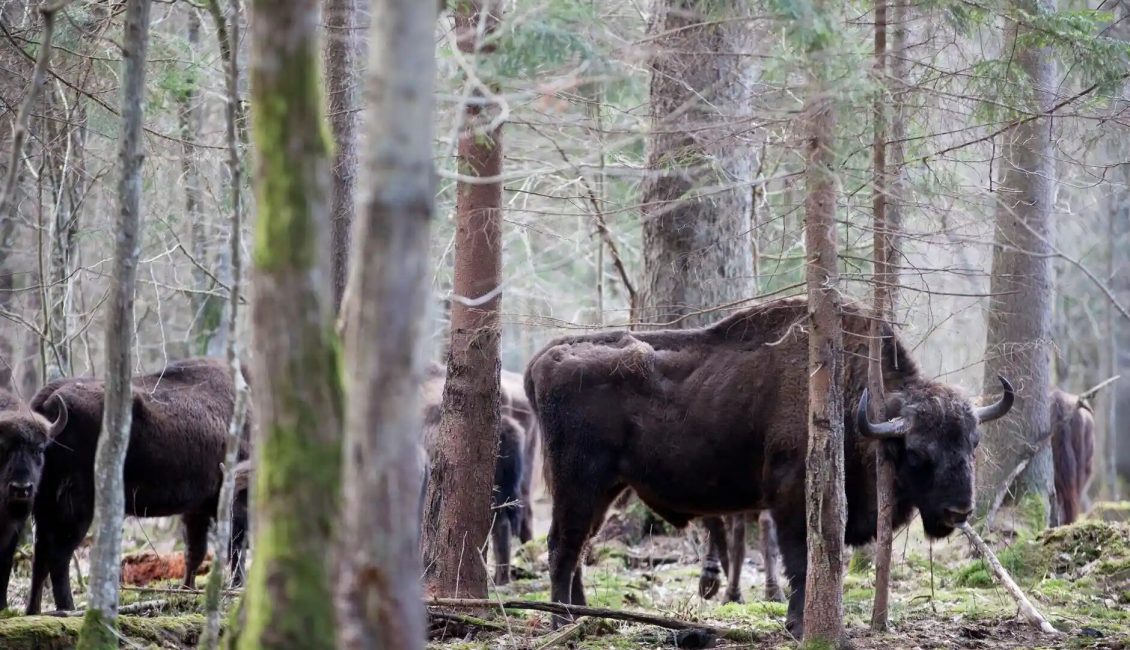 Source: Wild bison to return to UK for first time in 6,000 years

Forests Getting Younger and Shorter

Old, big trees are dying faster than in the past, leaving younger, less biodiverse forests that store less carbon worldwide.

Wild bison to return to UK for first time in 6,000 years

Wild bison are to return to the UK for the first time in 6,000 years, with the release of a small herd in Kent planned for spring 2022.The £1m project to reintroduce the animals will help secure the future of an endangered…

Fish and Wildlife Service had sought to strip safeguards, which would have allowed a limited number to obtain hunting licenses…

She’s an Authority on Earth’s Past. Now, Her Focus Is the Planet’s Future.

The climate scientist Maureen Raymo is leading the Lamont-Doherty Earth Observatory at Columbia. She has big plans for science, and diversity, too.

The number of wild animals killed by vehicle traffic was down as much as 45 percent in Maine and 21 percent in California, according to a U.C. Davis report.

Guest Article: A Place for Nature at the High-Level Political Forum

A recent study showed that only 20% of the countries analysed mention biodiversity as a national priority for sustainable development in their Voluntary National Reviews (VNRs) of their progress towards the SDGs.

Deforestation in Brazil Continues to Surge, Up 10.7 Percent in June

Deforestation in Brazil’s Amazon rain-forest rose 10.7 percent last month compared to June 2019, the 14th consecutive month of worsening tree loss, according to new data from the country’s national space research agency, INPE. In the first half of 2020, deforestation was up 25 percent, for a total 1,184…

While the world’s forests can play an important role in absorbing carbon dioxide and slowing climate change, new research indicates that elevated CO2 concentrations do not necessarily boost forests and that higher temperatures could cause changes in trees that reduce their ability grow.

An estimated 60 percent of fish species will struggle to reproduce in their current spawning habitats by 2100 under worst-case climate scenarios, according to a new study of nearly 700 salt and freshwater species published in the journal Science. The research argues that previous studies, which focused…

Minister of Fisheries, Oceans and the Canadian Coast Guard Bernadette Jordan announced Canada’s participation in the Global Ocean Alliance, founded by the United Kingdom in 2019, at a marine protection webinar on Thursday.

Is nature conservation, a drain or a net contributor to global economy? Experts weigh in

The ASEAN Member States, all of which are parties to the Convention on Biological Diversity, have shown considerable commitment to achieving the…

New research has proposed a long-term target to reduce species extinction rates, with an objective of a more natural rate of fewer than 20 extinctions per year…

More than one in four of the 120,372 plant and animal species assessed by the International Union for Conservation of Nature are at risk of extinction.

Canada joins Global Ocean Alliance: Advocates for protecting 30 per cent of the world’s ocean by …

First-of-its-kind report shows the global economy is better off with more nature protected….

Guidelines for protecting the interconnections of nature to enhance protected areas, conserve biodiversity, and increase resilience to climate change…

The International Union for Conservation of Nature is moving the whales from “endangered” to “critically endangered” on its red list of global species facing threats to their survival.

The HTO in Arctic Bay and four other nearby communities will start to receive $100,000 a year for monitoring and other related activities.

Rare gorillas in Nigeria captured on camera with babies

An alliance of nine local communities, the Conservation Association of the Mbe Mountains, has been working with the Wildlife Conservation Society …

Some sad news from the IUCN Red List of…

Some sad news from the IUCN Red List of Threatened Species. The first marine fish alive in modern times, the smooth handfish, has officially been…

A Rescue Plan for the Planet? Watch Our Debate Here.

A virtual event with eight speakers and one question: Has Covid-19 created a blueprint for combating climate change?

As COVID-19 batters the world and its economy, it’s time to rethink sustainable pathways for our planet. Rosy hopes that globalization and economic growth would bankroll waves of green investment and development are no longer realistic. It’s unlikely there will be enough money or attention to banish…

The United Nations Environment Programme is currently implementing a project funded by the Global Environment Facility on “Sustainable Capacity Building for Effective Participation in the BCH”, commonly known as the BCH III project.