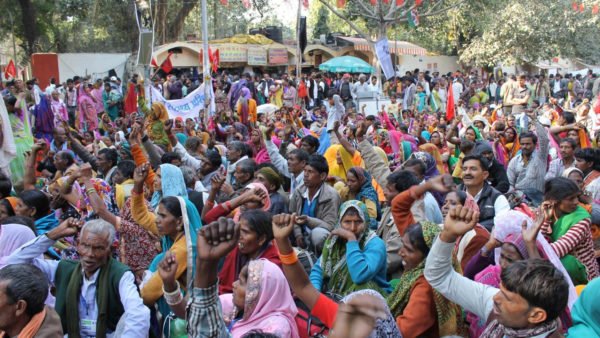 For too long, efforts to conserve nature globally have acted as if this entire planet is equally influenced by the human world. Yet different landscapes differ profoundly in how they are used and influenced by people, demanding different strategies to conserve biodiversity. Our map of the Three Global Conditions aims to clarify these conditions to enable people to work together to conserve biodiversity more fairly and equitably…

Ms. Elizabeth Maruma Mrema of Tanzania – Executive Secretary of the Secretariat of the Convention on Biological Diversity (CBD)

United Nations Secretary-General António Guterres, following consultation with the Bureau of the Conference of the Parties to the Convention on Biological Diversity (CBD), announced today…

Poaching of the big cats is on the rise, and a new study links their slaughter to corruption as well as investment from Chinese companies.

Every May, these birds stop in the Delaware Bay on their way to Arctic Canada. But a shortage of food this season puts their flight at risk.

With an Internet of Animals, Scientists Aim to Track and Save Wildlife

Building Back Better: Why Europe Must Lead a Global Green Recovery

With the global economy reeling from the pandemic, most nations are focusing stimulus programs on reviving employment. But Europe is moving forward with a Green Deal initiative that provides a framework for decarbonizing its economy and spurring the rest of the world to follow.

The strategy represents hope for people and wildlife, and can be a model for governments, but it still lacks critical funding to carry out its goals.

The modern world seems to lurch from one crisis to another. What if that is because the crises have shared underlying causes, and therefore tackling them as if they were independent events is doomed to fail?

Ms Mrema has been the Acting Executive Secretary of the CBD Secretariat since December 2019, prior to that, Ms Mrema had served as director of the Law Division at the United Nations Environment Programme (UNEP) in Nairobi, Kenya.

Being awarded with an international day very often means you are in some kind of trouble. So celebrating World Oceans Day today, 8 June, only a few weeks after World Earth Day, tells you something. Especially as 70% of Earth is, in fact, the ocean.

No one is safe until we all are: Global solutions for our global biodiversity crisis

The impact of biodiversity loss — greater exposure to infectious disease, for example — doesn’t recognise political jurisdictions. Our risk is collective. And we can’t protect ourselves without solutions that work across borders.

The intricate balance of life & nature: Lessons from COVID 19

As many countries now turn to recovery efforts in response to the economic challenges, it is crucial for us to remember this new norm has presented several opportunities for us to build back better with stronger, resilient economies in harmony with nature.

The legal framework on biodiversity conservation

The ongoing Covid-19 pandemic reminds us the fact that if we destroy biodiversity, we actually collapse the system that supports human life to exist. The significance of biodiversity to ensure human well-being and to achieve sustainable development is undeniable.

Supertrawlers spent almost 3,000 hours fishing in UK marine protected areas in 2019, making “a mockery of the word ‘protected’,” according to campaigners. Supertrawlers are those over 100 metres in length and can catch…

Campaigners hope the move will help end global trade in the scaly anteater, identified as a possible host for Covid-19…

World Oceans Day on June 8 is a time to celebrate and honour the oceans that feed us, regulate our climate, and generate most of the oxygen we breathe. They also serve as the foundation for much of the world’s economy, from tourism and fisheries to international shipping.

Seagrass meadows can be a powerful nature-based climate solution and help sustain communities hard-hit by stressors such as the COVID-19 pandemic, but these important ecosystems continue to decline. The importance of seagrasses…

Open up, share and network information so that marine stewardship can mitigate climate change, overfishing and pollution.

Research shows that among the challenges the region faces from biodiversity loss are increased human pressure on diminished natural resources, declining agricultural productivity and adverse climate change, among others.

The world needs a single goal for fighting the loss of nature, much like the 1.5C target for climate change, according to conservation experts.

Restoring ecosystems in the Mediterranean

As the Mediterranean region grapples with the COVID-19 pandemic, it is essential that to continue working on sealing the pathways through which pathogens can jump from animal hosts to humans. This can be achieved by restoring the health of strained of ecosystems and by halting the relentless encroachment on nature.

In one-fifth of environmental conflicts around the world, activists face criminal charges or imprisonment as a result of their work defending natural resources, according to a new analysis by researchers at the Autonomous University of Barcelona.

Half of our planet nearly intact from human influence

Roughly half of Earth’s ice-free land remains without significant human influence, according to a study from a team of international researchers led by the National Geographic Society and UC Davis.

There is no global treaty to govern the high seas. Here’s why we need one

Biodiversity-governance gap. Currently, international law does not meaningfully address biodiversity monitoring and conservation in the high seas. This …

Why ‘apocalypse’ is the wrong word when describing insect declines

Two meta-analyses, published in the journals Biological Conservation and Science, respectively, attempt to tackle this point. The first, published in …

A cold-loving ocean giant called the Spitsbergen’s bowhead whale had been hunted almost to extinction by the 1990s. The whales’ songs were recently detected in the waters east of…

Conservationists call to expand the amount of land formally protected.