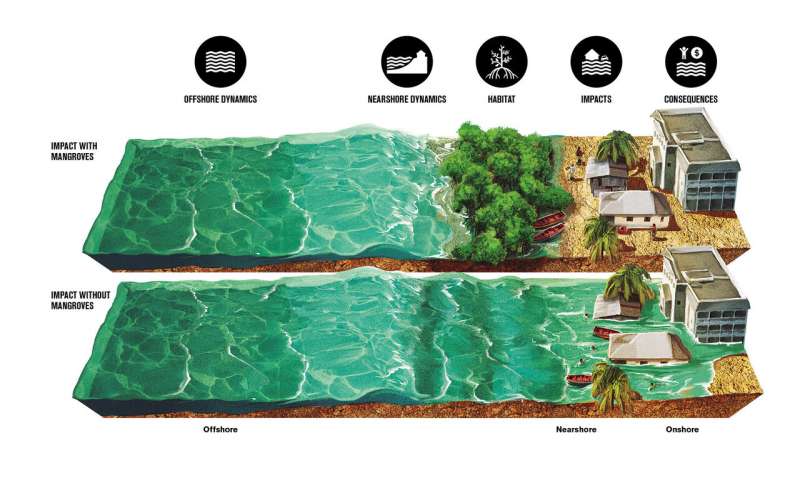 Source: Research shows mangrove conservation can pay for itself in flood protection

A study by the Global Mechanism of the UN Convention to Combat Desertification (UNCCD) has examined how SDG target 15.3 on achieving a land degradation neutral world contributes to…
Download the report here

Taking a Stand to Save Earth’s Oceans

Despite their immensity, the seas will be irreversibly depleted of life if nothing changes…

‘We used to be leaders’: the collapse of New Zealand’s landmark ocean park

Two decades since its creation the Hauraki Gulf Marine Park is overfished and overrun with sea urchins. Community groups are calling for urgent action to save the once abundant habitat…

Ecosystems the size of Amazon ‘can collapse within decades’

Even large ecosystems the size of the Amazon rainforest can collapse in a few decades, according to a study that shows bigger biomes break up relatively faster than small ones. The research reveals that once a tipping…

Thanks to their sheer size giant ecosystems like the Amazon’s rainforests are relatively impervious to environmental stresses compared to smaller ones. Or so we tend to think.

In Afghanistan, a new national park carries hopes for conservation and peace

Ibrahim Abrar’s first visit to Afghanistan’s Bamyan province, where he encountered the Dar-e-Bozurk, or Grand Canyon, is an experience he says he’ll never forget.

Close to tipping point, Amazon could collapse in 50 years

The Amazon rainforest is nearing a threshold which, once crossed, would see one of the world’s largest and richest ecosystems morph into arid savannah within half-a-century, scientists said Tuesday.

Residents of Beira, Mozambique-a small coastal city at the mouth of the Pungwe River-cannot be faulted for casting a wary eye towards the sky these days. One year ago, when Cyclone Idai slammed into Mozambique…

Environmentalist warns that coral reefs are in a bad state

Environmental scientist and managing director of CL Environmental Consultants, Dr Carlton Campbell has disclosed that coral reefs in the western end of the island are currently in a bad state.

Humanity’s last chance to save biodiversity?

Coronavirus has forced many to look again at how humanity relates to animals and nature. In Kunming this October, a meeting of importance to all life on the planet will take place…

Change to Drive Emperor Penguins to Extinction By 2100

Research has revealed that the effects of climate change could drive the emperor penguin to extinction by 2100 if we fail to reverse the detrimental transitions already set into motion.

Research shows mangrove conservation can pay for itself in flood protection

The natural coastal defenses provided by mangrove forests reduce annual flooding significantly in critical hotspots around the world. Without mangroves, flood damages would increase by more than…

Ten biodiversity-related publications to look out for in 2020

Scientists and most governments agree that the world is facing an unprecedented environmental crisis with huge numbers of species on the brink of extinction and global temperatures continuing to rise.

Now Or Never For Saving Our Natural World

The world is at a crossroads. The future of life on our planet – and thus our own – is in jeopardy. Humanity has overreached in its pursuit of affluence. Research shows that…

2020: Super year for women in biodiversity?

On March 8, International Women’s Day, we wanted to celebrate women’s achievements and contributions to life but also be reminded of what is still missing in terms of realizing equity and equality for women, including…

Can the private sector make it a super year for nature?

The beginning of the year has been full of news about business and the health of our planet. In January, BlackRock Chairman Larry Fink released his annual letter to CEOs that doubled down on his earlier exhortations for business to start considering its impacts and risk in a world with a rapidly changing…

What is the European Green Deal and will it really cost ?1tn?

There are precious few people who can inspire a mindset shift amidst the climate crisis, articulating a practical new paradigm for society and industry.

Tropical forests may be heating Earth by 2035

How biodiversity loss is hurting our ability to combat pandemics

The frequency of disease outbreaks has been increasing steadily. Between 1980 and 2013 there were 12,012 recorded outbreaks, comprising 44 million individual cases and affecting every country in the world.

A study by the Global Mechanism of the UN Convention to Combat Desertification (UNCCD) has examined how SDG target 15.3 on achieving a land degradation neutral world contributes to…

China is scheduled to hold the U.N. Convention on Biological Diversity in the southwest city of Kunming against a background of a global epidemic …

Although there is a general consensus about the biggest threats facing humanity and the planet, the complex links between individual risk categories have so far received too little attention…